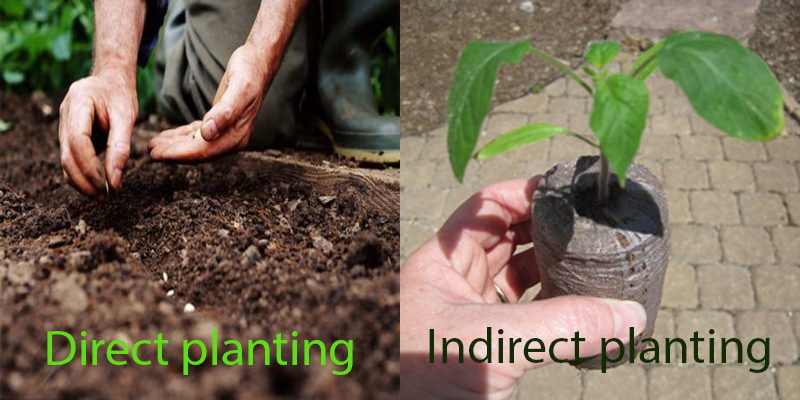 Overall planting methods around the world

The methods of planting crops employed by farmers around the world are based on two major media for crop propagation. The first is the conventional soil-based system and the other is the modern Aquaponics and hydroponic system knew the soil-less systems of planting crops.

Direct seeding in soils is common to cereals such as upland rice, corn, sorghum and millets; pulses such as soybean and peanut; vegetables with large seeds such as squash, root vegetables such as carrot and radish, and many leafy vegetables.

Indirect seeding is common to vegetables with small seeds such as tomato, eggplant, peppers, ornamental crops, fruit trees, and many perennial crops.

Different types of soils ranging from fine to coarse particle size composition of sand, silt and clay are used to grow different crops. For example, root crops such as beets and carrots thrive well in finely grained soils because such soils allow better root growth and development.

In a soilless system, crops are grown in solutions that behaves exactly like the soil because the essential mineral nutrients required by plants for growth are packed in the solutions. These growing methods include hydroponics, aquaponics and aeroponics.

Hydroponics is the concept of growing plants with nutrient and water in a soil-less medium while aqua-phonics combines raising fish in pond or tanks (aquaculture) with hydroponics that allows water to be recycled for the planting of vegetables. The water which contains the fish waste from the fish tanks/ponds are always rich in nutrient which helps to provide natural fertilizer for the plants. Aqua-phonics farming system uses natural bacteria to convert fish waste into natural fertilizer without the need to discard water or include any chemical fertilizers.

These hydroponics and aquaponics based system can be used to produce wide varieties of plants such as vegetables, fruits, and herbs but certain plants thrive better than others. It is best to choose quick developing plants which require shallow root depth and can grow within relatively small spaces. Pick any variety of leafy green vegetables and salad plant or water-cherishing herbs for the best production outcomes. Examples include lettuce, herbs, peppers, tomatoes, cucumbers, cabbage, broccoli, carrots, green onions, peas, and sunflower.

Aeroponics system is used to grow plants in an air or mist environment. Plants are suspended either in a closed or open environment. The hanging roots sprayed with mist water solution rich in essential nutrients. Unlike Hydroponics, it does not require supporting media such as peat, gravel and perlite. The aeroponic system often used to grow small veggies such as lettuce, strawberries, tomatoes, mint and basil.

This is another soil-less plant propagation technique that is used to grow cells of a plant under germ-free conditions. Plants are cloned and multiplied through the process of micropropagation of rapidly multiplying the plant parent material known as the stock to produce large progeny. Plants that can be grown by tissue culture include root and tuber crops such as cassava, yam and sweet potato, plantation crops; pineapple, banana, rubber and oil palm, veggies such as tomato, pepper and eggplant.

Benefits of soil-less based planting system

11 thoughts on “Overall planting methods around the world”